The dictionary defines calligraphy as decorative handwriting or handwritten lettering. It can be done using pens or brushes of various thicknesses. But you knew all that already. Who isn’t familiar with traditional Arabic and Chinese calligraphy, with their creative animal forms in the Islamic world and structured beauty in the Oriental? What you may not have read about or seen yet is the work contemporary artists are doing with this ancient art.

With the fragile 17th century book, Manual of Calligraphy and Painting (Shi zhu zhai shu hua pu) made accessible through the Cambridge University Library’s digital site, previously forbidden to be opened before its digitalisation, the revival of calligraphy is at a new high. If you’re unfamiliar with the works of revival artists of today, don’t fret; we’ve got a whole lot of modern calligraphers for you to check out, all of them doing fresh and interesting things with the art. The Manual of Calligraphy and Painting.

The small and intricate text is hard to read but the effect of the patterns is nevertheless hypnotic. Her work, which she chooses not to explain the significance and meanings of, is described on her Saatchi profile as “arousing the viewer’s curiosity to discover what are the photographed objects, what meanings lies behind the texts; and whether there is a thematic affinity between them.” This is all she reveals to enlighten fans about her work, thus adding a layer of mystery to it. 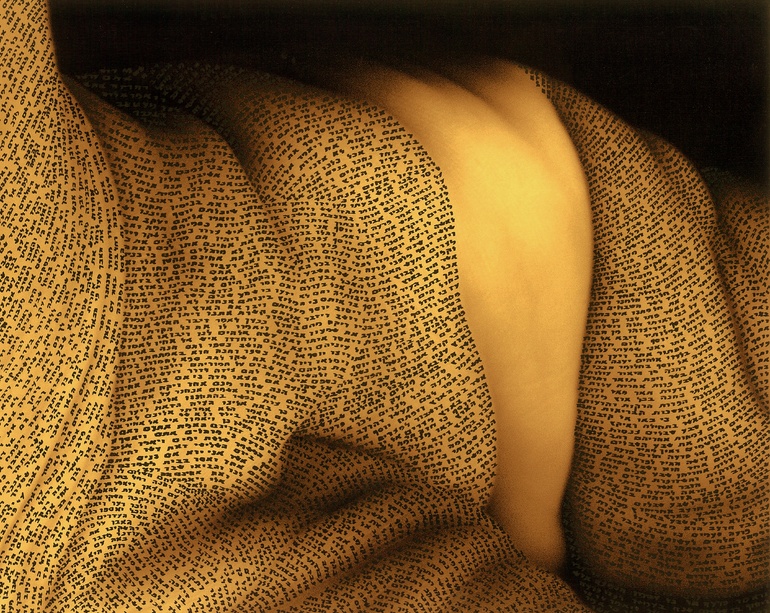 Where Bigal traces her Biblical roots, Nantes-based artist Julien Breton draws from Arabic as well as Latin calligraphy and then throws in elements of light and dance to create an expressive medley that adds new meaning to the culture. Experimenting with a variety of photographic settings on which his lettering is superimposed, Breton aka Kaalam makes any environment (be it a New York underpass, an abandoned building in France or a magnificent Indian fort) more beautiful with his synchronisation.

Kaalam claims, on his biography page, “A white sheet is too limiting. To paint on a canvas, however large, means in any case a limit within which I do not feel myself free to express my whole being. Only light is really infinite.” His enthralling ‘light calligraphy’ works (as he aptly calls them) can be seen on his website.

“Under the City,” Abstract calligraphy, Nantes.

Sebastian “Seb” Lester recreates classic and recognisable logos with an eerie accuracy that will fool you into believing that you are watching a machine at work. His Instagram feed is filled with time-lapse videos that mesmerise and captivate the eye. His recreations of logos of various aspects of popular culture–from brands to bands and television–are penned with a steady hand and it is no wonder that Seb Lester has developed typefaces for big brands such as NASA, Apple, The New York Times, British Airways, and H&M. Trust us, once you start looking through the English artist’s work, you won’t be able to stop. It may just inspire you to pick up your pen and start “doodling,” as he understates it.

Tolga Girgin, electrical engineer and graphic designer in Turkey, is a true testament to the survival of calligraphy today. His graceful letters appear to leap off the page in his 3-Dimensional designs that have a charm of their own. Girgin’s works (which we’ve featured previously) show clearly that calligraphy will remain relevant for as long as human use the written form to communicate and is a perfect example of the evolution of the art form. The clever shading, bright colours and flowing forms make his work eye-catching. To see more of his skillful use of shadow and perception, go to Girgin’s Instagram account. Yes, we’ve saved you (one of) the best for last. Berlin-based artists Martin Flor and Giuseppe Salerno are our favourites, mainly because we love their competitive spirit. They have created a project that brings together lettering and calligraphy–two arts that have been around since time immemorial and have developed side-by-side. Ever since humans have first attempted to communicate, people have been representing their ideas visually, and Guiseppe and Flor pay tribute to this in their endeavour ‘Lettering vs. Calligraphy‘.

They challenge themselves to create their best work and fill each letter with personality. Engaging in what they call an “optical dialogue,” they play with the potential and limitations of both forms. Their work, that can be accessed and voted for at their website is a visual delight. You can also submit work to them, and participate in open battles! Andrew Fox, a designer and illustrator based in London, uses calligraphy to draw minimalistic animals, as pictured below. In what is almost a tribute to the ancient Arabic form of calligraphic representation of birds and beasts, Fox dextrously investigates thickness and constraint. He uses calligraphic pens and techniques to create his adorable pieces. His work is available on his Behance page. Calligraphy, an art as old as recorded time, is a powerful tool, but with great power comes great responsibility (shout-out to Uncle Ben!). These entrancing new artists have therefore devoted their careers to proving that pictorial and aesthetically appealing representations of the written word will never go out of style. In a true testament to the sustainability of art, modern calligraphers simultaneously inspire curiosity and awe. Taking a look at their work will definitely leave you just that little bit more enriched.

Whether you’re visiting for the 2016 Olympics or not, here’s a list of things to do in Rio de Janeiro worthy of a gold medal!