Do you trust your eyes? The obvious answer would be yes. But then how do you explain the fights that you had with your friends and maybe your own brain over the whole the dress being black and blue/white and golden fiasco? The said enigma that was ruling the internet roost a while ago generated a fissure through almost all internet user’s brains.

These kinds of rifts between the eye and the brain are a common parable when it comes to the art of optical illusion. When the most brilliant minds become slaves to the most trivial deceptions, it leaves one wondering, is anything that we witness, real at all? Or is it just a funny trick that is being played on us by an alternate race ruling the planet Earth?

The misconception when it comes to perception is the biggest mystery of our time.  It is best to assume that reality is not as plain and simple as we would like to think; it has layers, nuances, shadows and crevices that the human eye is blind to and which our brain disparages as nonsense.

“Throughout history, curious minds have questioned, why our eyes are so easily fooled by simple drawings. Illusions we have found can reveal everything from how we process time and space to our experience of consciousness”, says Melissa Hogenboom with regards to optical illusion.

This dual nature of reality and our perception has been played with in highly stunning and dramatic ways by artists throughout history. The use of various principles of optical illusion helps the artists maintain the interest and rapture of their audience. It makes their artwork assume a life and soul of its own, breathing in our awe, incredulity and fortunate disbelief.

Rob Gonsalves’s paintings were the first to catch our attention in the enigmatic field of painting illusions. Now we have dug deeper into the art; here are a few works by some ambitious artists that made our mind boggle.

For Jerameel Lu, art is her true calling. Though she works as a civil engineer in Philippines to sustain her body, her creative soul cannot survive without her passion, i.e. art. She effortlessly transforms 2D pencil strokes into 3D illustrations of the morbid world – mostly skulls. When it comes to the use of mere paper and pencil to give life to an art work that jumps out at you and stuns you with its level of solidity,  it would be sacrilegious to ignore three master minds- Ramon Bruin, Alessandro Diddi and Fredo. 2. THE ART OF LEVITATION

“Is the thing really floating?” seems to be the most common reaction when it comes to looking at the graffiti by Oedith, a Portuguese street artist. His  present work is reminiscent of his past as a tattoo artist. His ability to mix spray paint with anamorphic art and perspective is a feat only a few can master.  His use of the space between two adjacent walls to bring out an illusion of substance and form is nothing short of a marvel. His art work seems to give out light and a faint shadow that zaps your mind, forcing your brain to take at least a few minutes to see through his innovative deception. Erik Johansson’s art works are real and surreal at the same time. The underlying sense of contrast in his work intrigues the eye and the brain.  All his pictures have an everyday life context but with a captivating twist;  in the same frame you would see two or more versions of reality, giving you full freedom to choose the one you like. One of his pieces (below)  involving cars was even commissioned by the Transportation Accident Commission in Australia to illustrate the disorientation that can occur when driving under the influence of drugs. Erik’s pictures are the boiling pot of his ideas and perceptions.

Do not shut down your devices just yet. There are many more interesting art works to explore when it comes to the use of optical illusions. A lot of them will even jolt your world with their artistic spark. For instance take a look at the street art by anonymous artists from the United Kingdom. These artists don’t believe in defining their technique. There jaw dropping illusions speak for themselves. If you don’t pay attention, you might just find yourself falling deep into a carefully laid out trap. 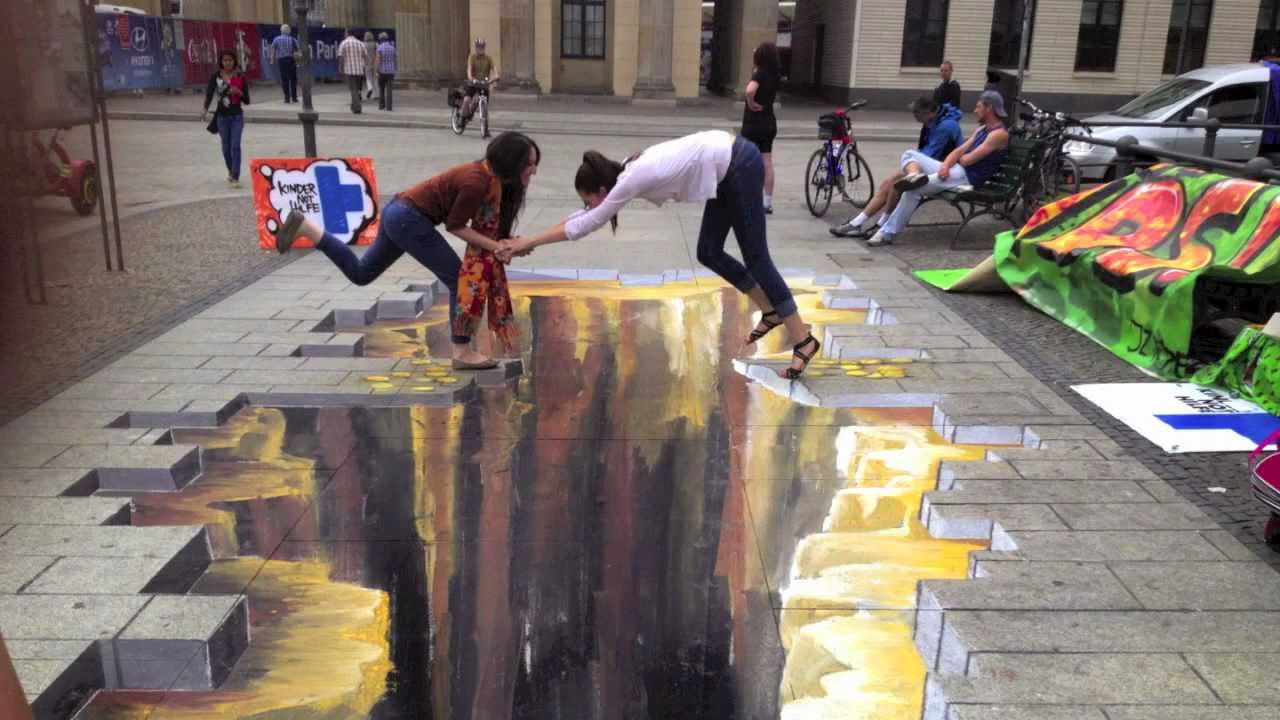 The brilliance of the art of visual manipulation lies in its eccentricity, striking an indelible chord in our hearts and minds.  The human brain, since the inception of time has been slaving to explain the mysteries of the unknown and the unexplained.  At any point of time real can become unreal and the unreal, real. When someday somewhere you feel like the air around you has changed and things are no longer as they were, it’s a signal from the universe- God’s illusion is at work.

NeSpoon brings her unique touch to the field of street art by adorning the corners of chaotic city lives with intricately woven lace murals.