“Creativity is allowing yourself to make mistakes. Art is to know which ones to keep.  -Scott Adams ”

The best artifacts in life always emerge from the act of infusing art into situations where discovering art is impossible. In simple words, out of the various artistic passions pursued by people all around the world, the most fascinating ones are the absolutely improbable ones, the ones that can’t possibly strike an ordinary human mind. One of the most successful, yet intangible art, today is Latte Art. Who could have imagined that there would come a day when people would be doodling extraordinary etchings on the surface of a mere Sunday morning beverage? 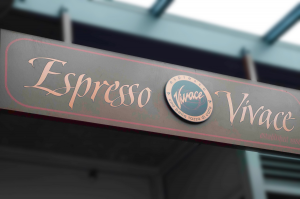 Though a part of Latte Art originally found fire in Italy, the main reason it gained popularity is David Schomer, the Co-Founder of one of the best coffee manufacturing companies in the world, ‘The Espresso Vivace’. Schomer, unlike his other counterparts, shows no interest in terrestrial expansion of his business but emphasizes on unparalleled quality. Latte Art consists of two simple basic ingredients, coffee and milk. However the actual art lies not in what it consists of, but within the preciseness of the composition of the sweet concoction. ‘Crema’ is defined as a blend of coffee oil and brewed coffee, shot into water, and ‘Microfoam’ is defined as the emulsion of air into thin milk. The concept of Microfoam was devised by Jack Kelly of ‘Uptown Espresso’. The meticulous manual diffusion of Microfoam onto Crema, in a peculiarly desired way gives rise to beautiful Coffee Art pieces.

We, at The Yellow Sparrow, decided to give you a taste of some of the most popular Latte Art maestros of today.

Latte artist Ben Morrow lives in Melbourne, the coffee capital of Australia. Ben is a creative and natural coffee enthusiast, and has extensively researched and experimented with the beverage, which has helped him land several trophies and winning positions in a plethora of cafe competitions and championships – his most significant achievement being the first prize in Coffee Masters, a multidisciplinary coffee competition that pits the professional barista’s skill set against a series of challenges, a ticking time clock, and distinguished judges. Having an utter fascination for hearts, Ben is known for his inventively fashioned heart shaped etchings, embellished with a beautiful touch. Ben’s work revolves around the concept of creating basic Latte Art and then improvising on it with extreme preciseness. Ben’s passion for coffee has also made him a part of many initiatives all around the globe, such as the Tourism Victoria where he traveled to India and played an important role in educating people about the rampant coffee culture in Melbourne. Ben has thousands of followers on Instagram, where he frequently puts up pictures of his beautiful artwork. 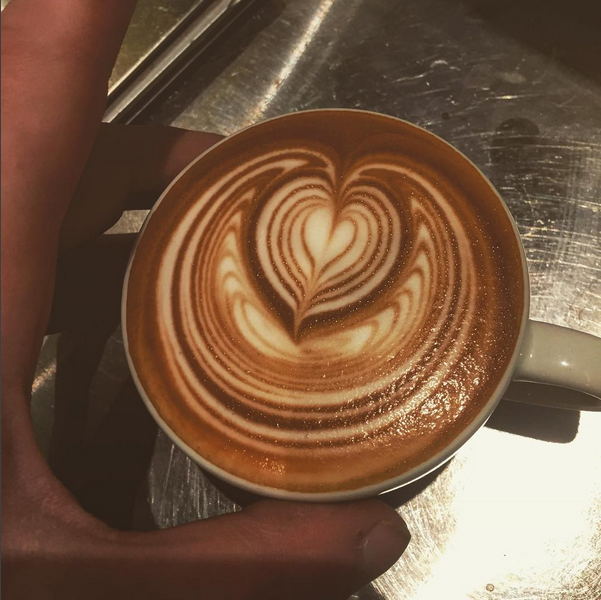 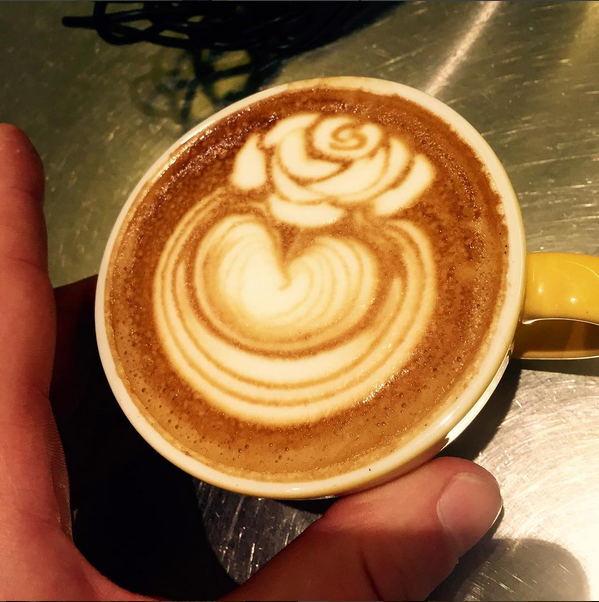 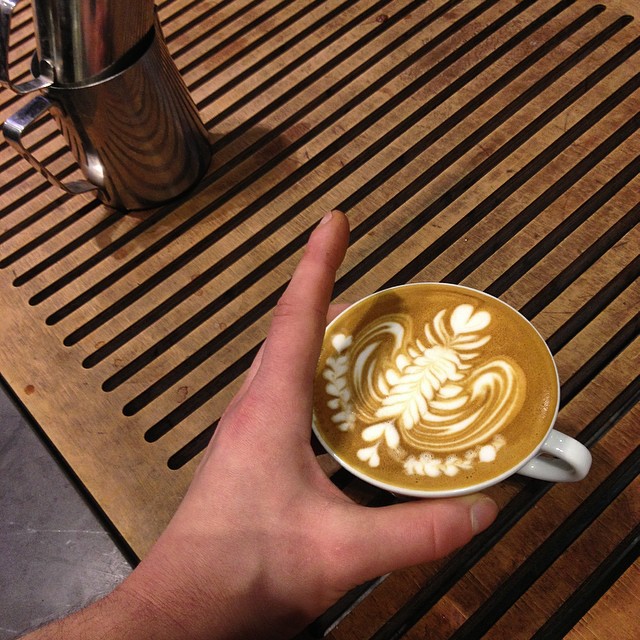 Most engineers just want to get a job pertaining to their own field and spend the rest of their life earning money, however this German Barista despite pursuing engineering, did not give up his passion and obsession for coffee, and went on with coffee artistry to build for himself an exorbitantly glamorous livelihood in the same. Dritan Alsela is well known, for not only his world class Latte Art, but also for his monomania for perfection, in both – taste as well as the visage of his coffee. Even though Dritan owns a cafe in Dusseldorf, he travels all around the globe playing a cogent role in Latte Art related events and has been booked as a judge for many coffee exhibitions in Italy, New York, London, Amsterdam and other eminent parts of the world. Dritan has become an iconic international image, an inspiration for many baristas, and an expert artist for the rest of the audience. He has millions of views on his Youtube videos, a considerable number of followers on Twitter, a million followers on his official Facebook page and more than a hundred thousand followers on Instagram where he keeps uploading demonstrations of his transfixing artwork. 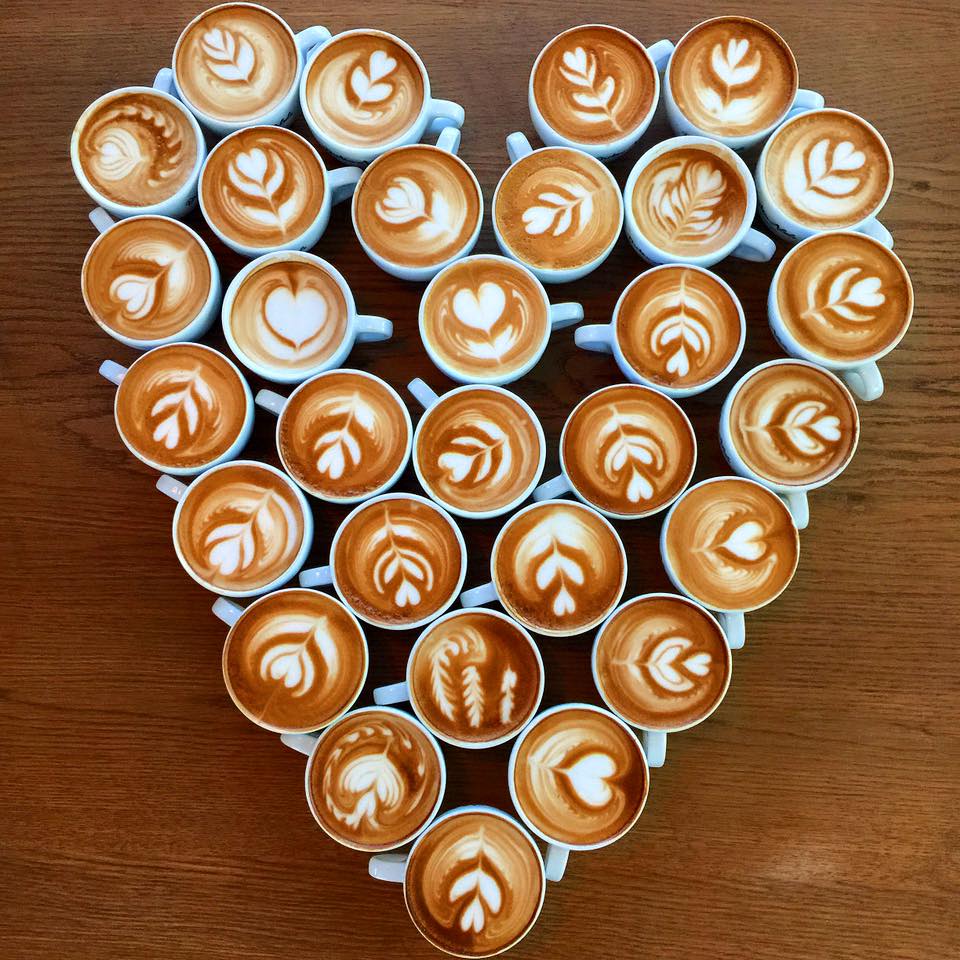 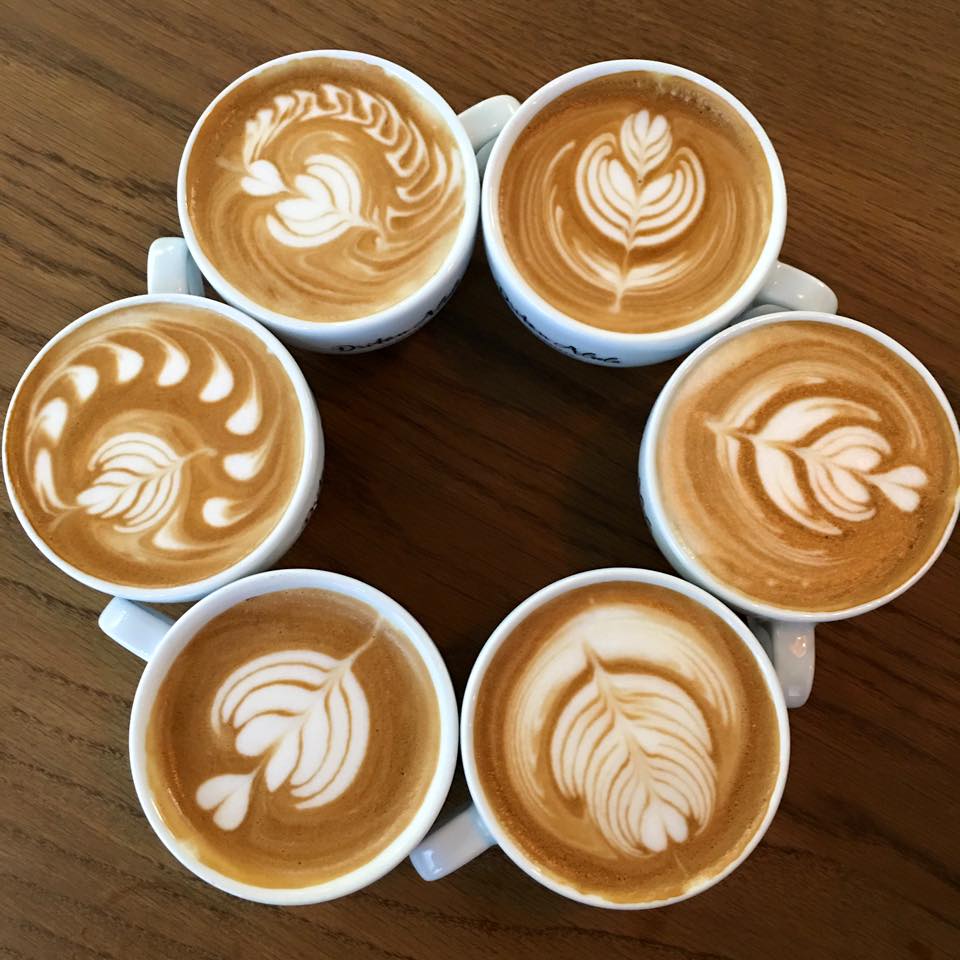 Most latte artists are experts in doodling leaves and hearts, with their etchings generally revolving around these elements; however an insanely innovative Japanese barista, Kazuki Yamamoto, has made it evident that Latte Art can rise over and above these elements. Kazuki is capable of etching faces of various anime/manga characters, animals and celebrities with coffee, exalting the art to new heights. Besides these, this artist can also sculpt brilliant three dimensional extrusions of the latte, protruding out of the cup of coffee. One of Kazuki’s brilliant demonstrations of 3D Latte Art is a Microfoam sculpture of a cat jumping from one cup into the other, the latter having a doodle of two fish, making the cup resemble a fish bowl. Kazuki’s works can be viewed on his Twitter account, which he keeps updating every now and then. 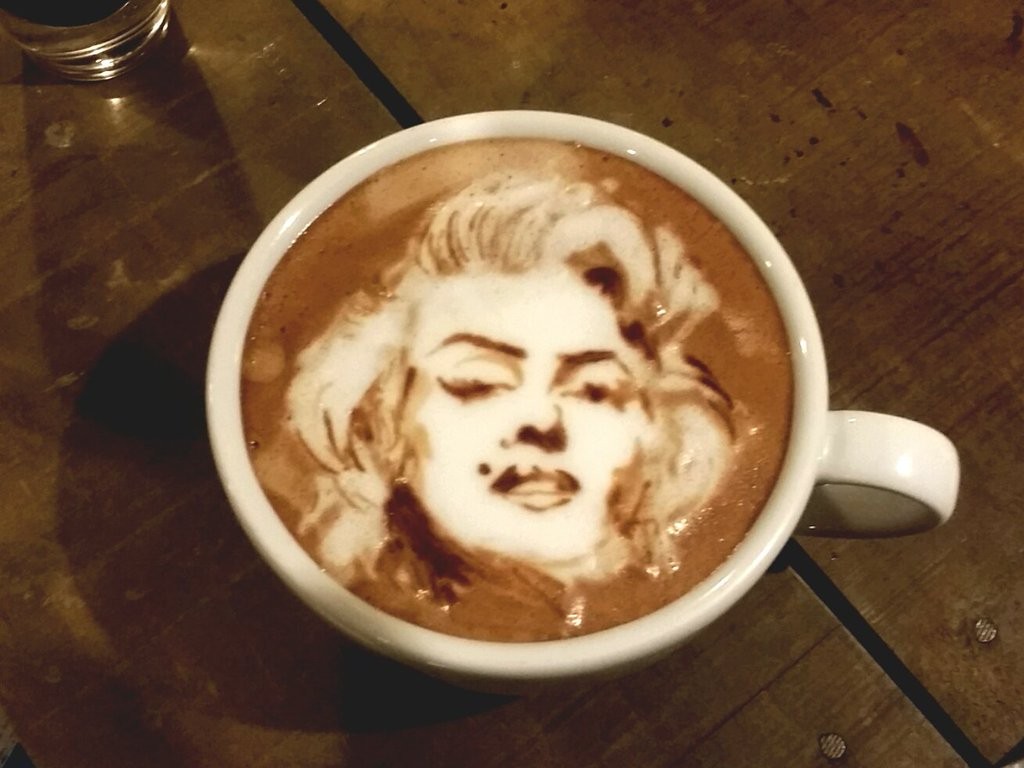 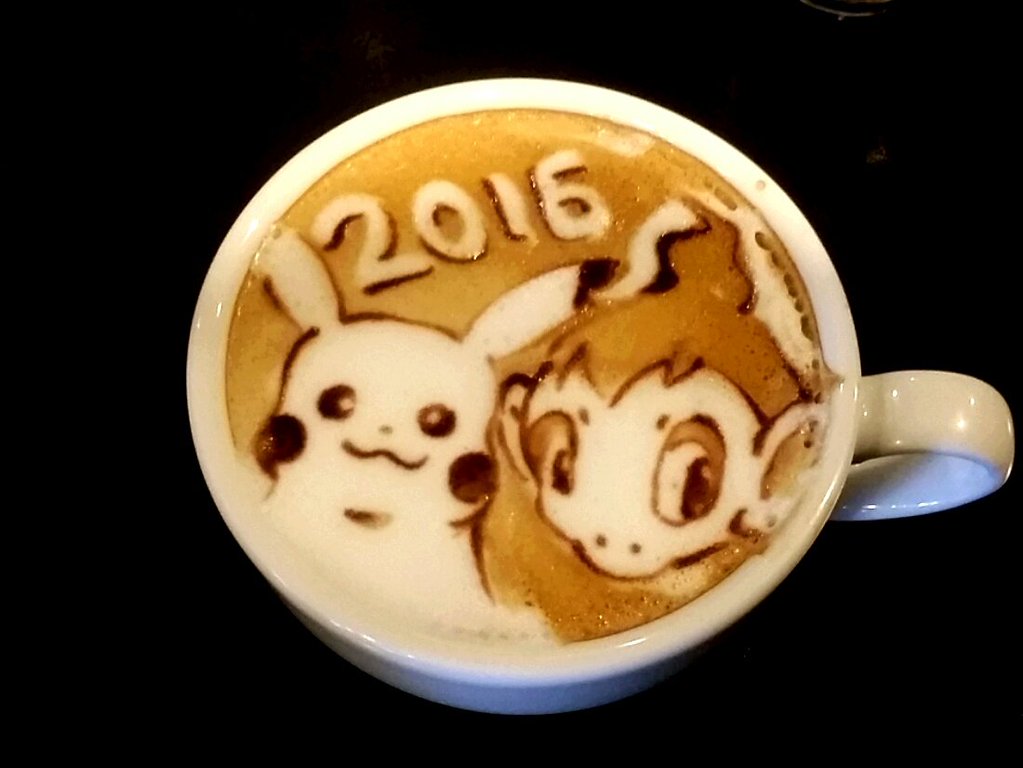 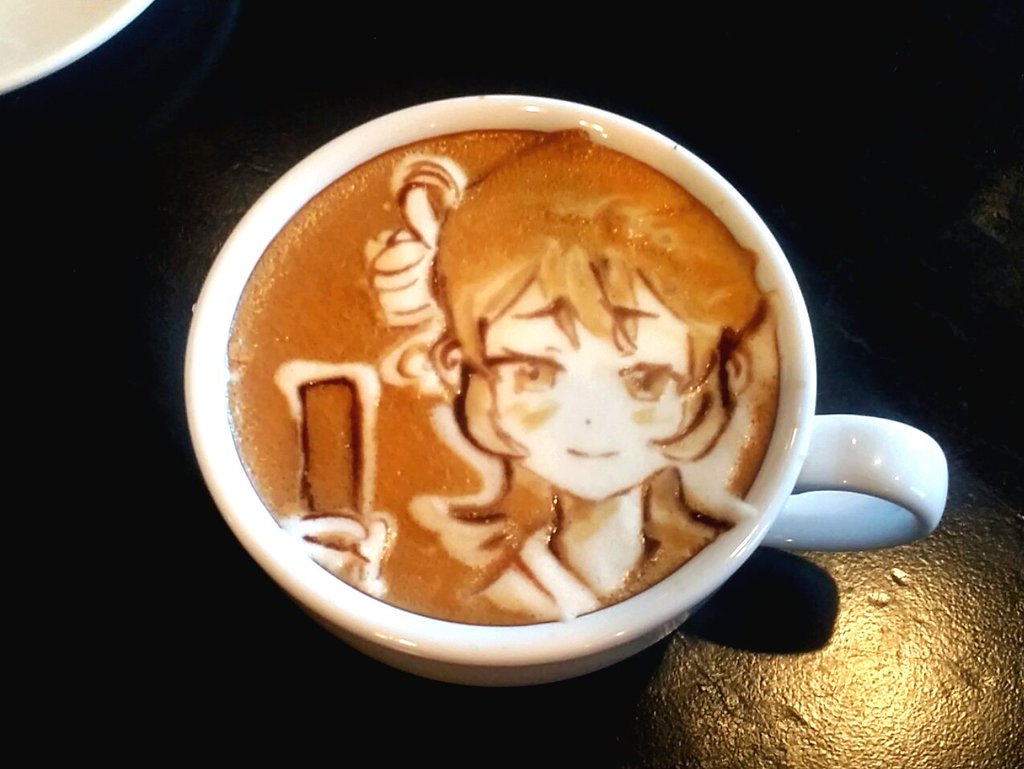 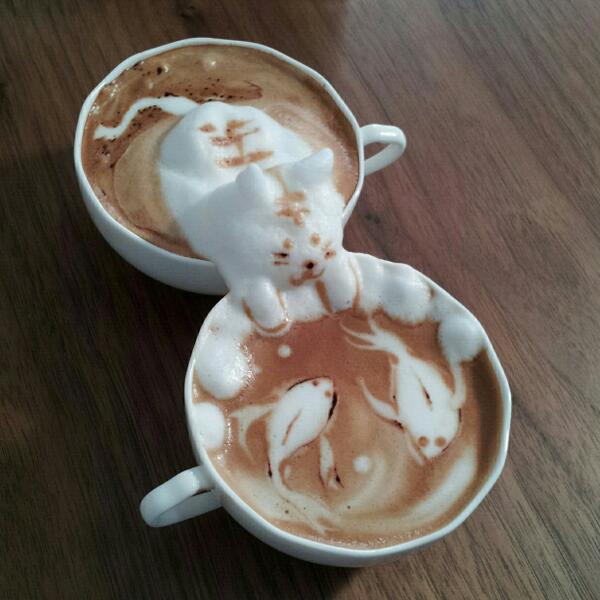 Latte art is not the only aspect responsible for invoking creativity in mocha beans. Innovators have discovered another way to express the hidden art in coffee, by using them as means to sketch beautiful paintings, known as – yes, you guessed right – Coffee Art.

Meet  Angel Sarkela-Saur and Andrew Saur. This duo has been painting with coffee since a decade and take immense pride in their creations. They use coffee as the sole medium for shading and sketching intriguing masterpieces, an activity which they have denominated as ‘Coffee art’. Their inventiveness in exploring coffee as a medium of paint, has led them to become quite successful and popular; enabling them to establish a business for themselves, where they sell their works to art admirers. This illustrious duo has gained eminent  popularity all around the world to an extent where they have been invited to US, Milan, Athens and many other countries to exhibit their prowess in coffee artistry. Apart from paintings, the duo has also created animations contrived solely from the drawings sketched using coffee as means of paint. Their avant-garde works can be viewed on their official site. 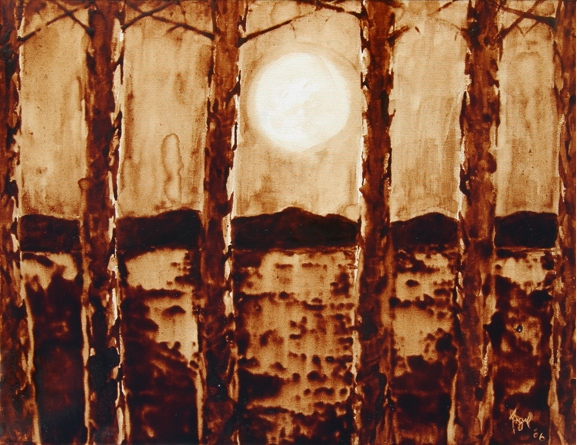 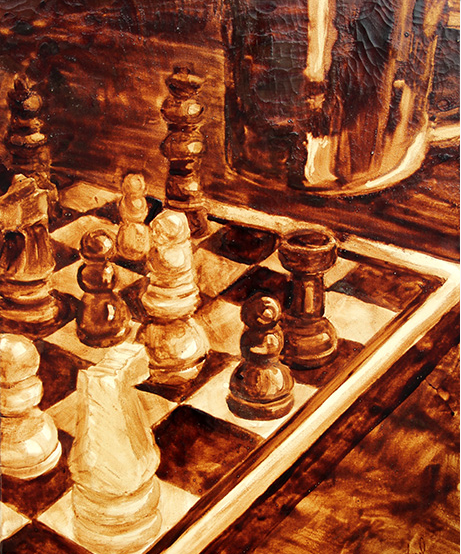 Using a variety of colours, Chen Yingjie aka Hua Tunan creates artworks by splattering paint and transforming the canvas into a multi-hued organized chaos.